Stability and peace in Central Asia 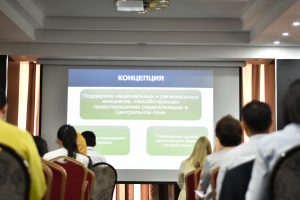 Contributing to stability and peace in Central Asia through media literacy, improved reporting and regional cooperation

In April, 2018 new regional project was launched entitled as “Contributing to stability and peace in Central Asia through media literacy, improved reporting and regional cooperation”, funded by the European Union and implemented by Internews

Project is focused on national and regional efforts to prevent radicalisation in Central Asia through increasing the capacity of journalists, civic activists and media professionals (through training activities, workshops both on national and regional level, and innovation laboratories) in the production of high-quality media content and raising the level of critical media consumption of representatives of civil society, decision-makers and ordinary public.

This activity will be implemented through:

The second International Forum “The role of media in preventing violent extremism” organized by Internews within the framework of the European Union funded project “Contributing to stability and peace...

The 10-day Training of Trainers (TOT) on conflict-sensitive journalism will start on June 18 with participation 20 of media representatives, civil journalists, media experts and trainers from Central...