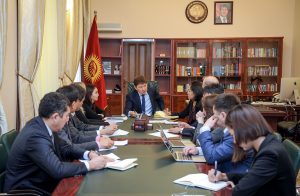 On Monday, November 27, Elina Karakulova Director of representative office of Internews in Kyrgyzstan, participated in the meeting on  development and implementation of  the "Open data" policy and accession to  partnership of the international initiative "Open Government" (Open Government Partnership).

This meeting was initiated by Prime Minister Sapar Isakov, who noted the importance of this project. He stressed that implementation of the "Open data" policy is a key stage in promotion of the "Taza koom" national program  and part of strategy and action plan Open Government Partnership.

He told to the participants that the KR as a truly democratic country should implement the "Open data" policy.

— There are important factors of rapprochement between the authorities and the people, maximum availability of information, openness and accountability of government agencies, improvements public confidence in our work. Digital data are the fuel for the digital economy and business of the new format, – said Isakov.

According to him, this measure will significantly simplify doing business, ease of doing business and increase investment attractiveness of the state.

Adviser of the head of Government Gulnura Toralieva noted that currently is actively working on accession of Kyrgyzstan to the International Initiative Open Government Partnership and the implementation of the policy "Open data" in the country. It is planned to introduce this policy in a pilot mode on the basis of eight ministries and departments of the Republic.

Nurbek Abaskakov the chairman of the State Committee of information technologies and communications informed, that the project is expected to scale work on digitization of  archives and materials of state bodies. The state registration service is mandated to expedite the solution of organizational and financial issues to digitize the data and archives of government agencies with the involvement of more than 200 people with disabilities.

The meeting was attended by advisers of the Prime Minister Talant Sultanov and Gulnura Toralieva, Chairman of the state Committee of information technologies and communications Abaskanov Nurbek, head of the public Council of the Ministry of Finance Bakhyt Satybekov, senior coordinator of the world Bank's Global development practice of information and communicating technologies Oleg Petrov, senior specialist of public sector development the world Bank Emil Abdykalykov, Director of the Representative office of Internews in the Kyrgyz Republic Elina Karakulova, Manager of the programme "Freedom of information" of the "Soros – Kyrgyzstan" Lira Samykbaeva and an independent expert Varvara Lokteva.