The experts of the School of Peacemaking and Media Technology presents the CA “Hate Speech and Sarcasm in the 2021 Kyrgyzstan Presidential Election Discourse” study, which was conducted with the support of the USAID-funded Media-K project and Internews in the Kyrgyz Republic from December 15, 2020, to January 20, 2021.

The study is based on multilingual media monitoring and content analysis of selected online media outlets and social media with the aim of examining hate speech in discussions on the early presidential election in Kyrgyzstan. The level of documented hate speech during the presidential election campaign was half that observed during the parliamentary election. However, this does not mean that the society’s culture of polemics or the level of online ethics has been improved.

Experts attribute this to the passive election campaign, the “early” election, an unchanged list of candidates, and the “social burnout” of journalists, users, and speakers due to the large volume of socio-political events all of this was reflected in a decrease in interest toward what was occurring and affected the public discourse. The researchers studied the trends and dynamics of hate speech, classified it by types of intolerance, and identified the reasons for the prevalence of one trend over another.

Diagram 1. Comparative dynamics by intolerance trend in analyzed materials in election discourses in 2020 and 2021

Moreover, a range of ironic and sarcastic comments and images containing obscene language, slang, and offensive expressions was documented on social media and in forums posted under materials in online media outlets. Sarcasm was often used to bolster a negative public perception of a certain individual and to mask hate speech.

Flawed arguments, divisive wording, and the distortion of opponents’ positions were also documented in online discussions and in the media. As noted in the report, this type of hate speech manifested as anti-western rhetoric, the drawing of false parallels between candidates and various identities, and the formation of dehumanizing metaphors based on the comparison of people and animals.

The experts recommend developing and implementing public awareness campaigns on the efficiency of tolerant technologies in public discourse and continuing to introduce editorial media practices of politically correct vocabulary and stylistics based on the pluralism of opinions and freedom of expression. It is also imperative to present the voices of minority, societal, and discriminated groups, explain the constitutional rights to the audience, and promote responsible journalism in working with comments (moderation and pre-moderation) posted under articles published in the media. 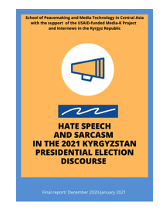