How the domestic television industry to survive the current difficult time? “Hard Day Evening” on TV1KG on Monday, June 8, held a discussion on the topic: “Television in the Kyrgyz Republic 2020”.

The host of the program, Maxim Poletaev, invited Dastan Bekeshev, the deputy of parliament, and the head of the Supervisory Board of the Industrial Media Committee Association, media expert Marina Kydyralieva, to participate in the live broadcast. Also, at the beginning of the transmission, through a teleconference, Elina Karakulova, director of the Internews representative office in the Kyrgyz Republic, expressed her vision of the situation.

We offer you the most important points of her speech. 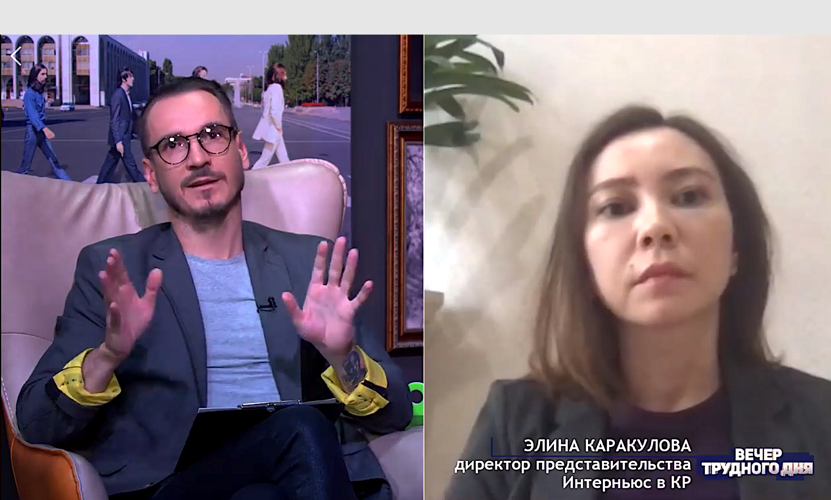 - The law on non-governmental organizations and non-commercial organizations is adopted in a hurry, without any understanding of why this is done and initiated by people who themselves are not transparent.

- This law on non-commercial organizations, which is now being proposed, will be quite complicated for small non-governmental organizations that are engaged in service activities. They help civil society, the vulnerable population, our citizens, to whom the hand of the state does not reach.

- During the quarantine period because of the coronavirus, we saw that just such organizations showed themselves very well, helped, there were volunteer groups.

These regulatory mechanisms will complicate their work. They will have to hire accountants and people who are engaged in reporting, and this is quite a big and serious work.

- Laws should be adopted for development ... but it will not contribute to this

About amendments to the law "On Television and Radio Broadcasting"

- Amendments to the relay create unequal conditions in the market. This is the most important thing our media industry is up against today.

- This is a rather outrageous fact, because the local television channels are required to comply with the law "On Television and Radio Broadcasting." They are obliged to produce 50% of domestic local content and give 50% of the content in the state language. In order to produce this content, large advertising budgets are needed. And this year they felt due to the coronavirus.

- The fall from advertising revenue this year reached 70-80% in the television segment. At the same time, we are adopting a bill that will simply finish off the industry.

- We know that ORT is in Bishkek in the top three, and in the top 5 in the country. This means that most of the advertising can get on ORT. We are depriving the local market of a significant portion of our revenue. This will be 30-40%. Add it all now with 70% that the coronavirus took from us. At the same time, foreign television channels do not comply with the law, there will be no Kyrgyz language, no domestic content. They are not obliged to do this according to these amendments, which are now being proposed and, accordingly, the local market will simply be destroyed.

- I do not think that our deputies understand this. If they understand, it is strange that the deputies are against national interests, against the national economy.

- We are the only country in Central Asia where there are so many television channels and they really represent a palette of opinions. If this palette does not exist, then what can we talk about?

- You can influence and implement policies through one or two channels. And our TV viewer will lose a lot.

- We are not just talking about a television market or advertising on a single TV channel. It is also information security, it is informing our citizens through various sources

- We are not just talking about a television market or advertising on a single TV channel. It is also information security; it is informing our citizens through various sources. This is pluralism and representation of various opinions that we now have, although on TV there are fewer, and more online.

- The most important thing - workplaces. Imagine, this is an entire industry - 60 television channels are broadcasting now, did anyone wonder how many workplaces are these?

Not a single letter, not a single legal opinion was read out. Next- the second reading. It seems that this question is already a foregone conclusion.

- This bill is now being adopted without Regulatory Impact Assessment (RIA), although this must be done when the bill affects the economy, finances and economic resources of the country.

- I'm afraid that by the fall we will lose most of our television segment, including such small television channels as TV1kg.

What steps can we take

- Media needs to be united, because it is about preserving the domestic television industry, we must form public opinion together. Media should inform their audience of what is happening.

- By the way, we have many repeaters that come to the market themselves, they pay for broadcasting and comply with the law. Why exactly these two relays create such special conditions is a question. Why should our taxpayers pay for this - also a great question.

- It is very strange that it is the relevant Ministry of Culture of Information and Tourism that proposes this bill. This is the agency, that tries to regulate television channels to give them instructions, to give warnings when, for example, the copyright law is not respected, when the law on domestic content and state language is not respected.

- Our TV channels have very strict requirements, up to closing. Against this background, only two foreign television channels receive such preferences. This is unfair to the local market.

About the situation with the arson of a TV channel in Talas.

In the pre-election period, there will be a lot of redistribution of the spheres of informational influence.

- This is really a wake-up call. This is an alarming trend before the election, which started not today. Last year we also had attacks on journalists. Bolot Temirov was beaten in the courtyard of the editorial office, ddos ​​- attacks on websites of independent publications continue.

- Before the election, we can come to a situation where our voter may have a very limited number of sources of information. This is very sad and bad, in no case should this be allowed.

- All the media organizations that work for us have signed a petition to the authorities and law enforcement agencies, so that this case is investigated necessarily, a word is said: that this is unacceptable, that the authorities will deal with this investigation. Until we did not hear such a promise ...

If there are no alternative sources of information, then there will be a dominance of fake disinformation, manipulation. Open conflicts will occur.  It is important to understand that the social fabric of society will simply collapse. Without media, we cannot be a truly stable state.

The full video can be viewed below: