Home / Main news / How to save Kyrgyzstani independent media in times of the pandemic: Internews Media-K Project experience

How to save Kyrgyzstani independent media in times of the pandemic: Internews Media-K Project experience

Media-K Project provided emergency financial assistance to a group of independent media outlets to ensure their survival during and after the COVID-19 pandemic.

13 selected newsrooms and TV channels have survived the difficult post-Сovid-19 period through the support of the Internews emergency fund.

The local advertising market has 80-90 percent decrease in TV segment since March 2020 due to the COVID-19 pandemic. Many newsrooms had to cut journalists' salaries, fire employees, or send them on unpaid leave. A lot of newsrooms were on the verge of closing.

Mahmud Amiraev, the Director of TV1.kg broadcaster tells that during the pandemic last year they had to send to unpaid leave their creative team which produces «Vecher Trudnogo Dnya» (A Hard Day’s Night) talk show. The media outlet was in a tough financial situation when they lost more than 70% of their advertising revenue and the number of advertisers dropped significantly. 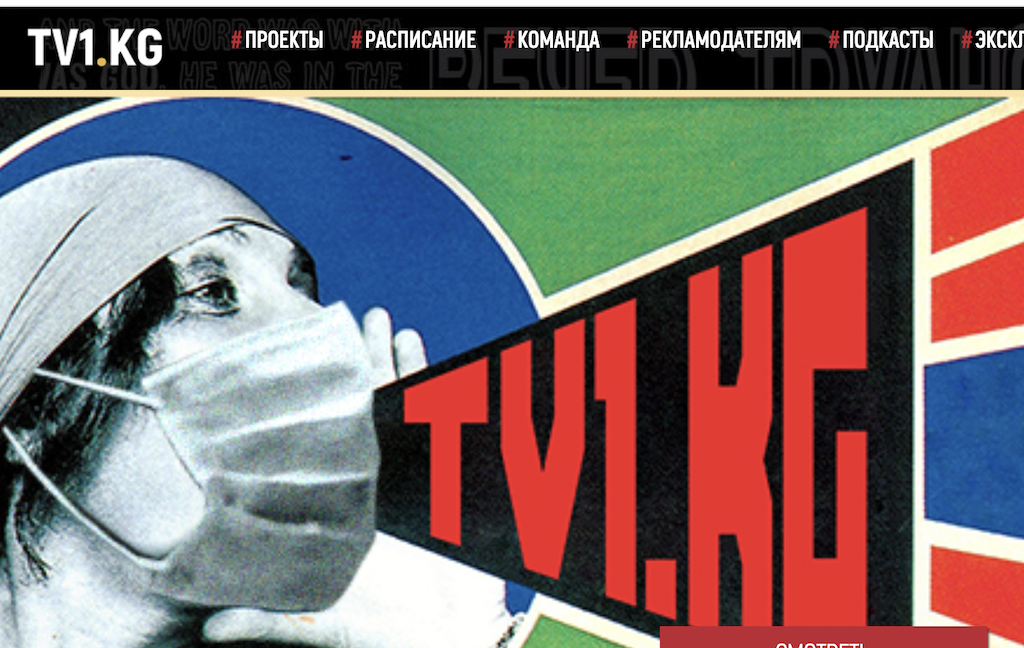 With the support of Internews’ Media-K project, we compensated the gap out of advertising decrease, and the grant aid came timely, - Mahmud Amiraev notes.

Kloop.kg newsroom showed the most successful survival experience without a single employee being fired during the Covid crisis.

Moreover, the newsroom hired new employees with the Media-K support. 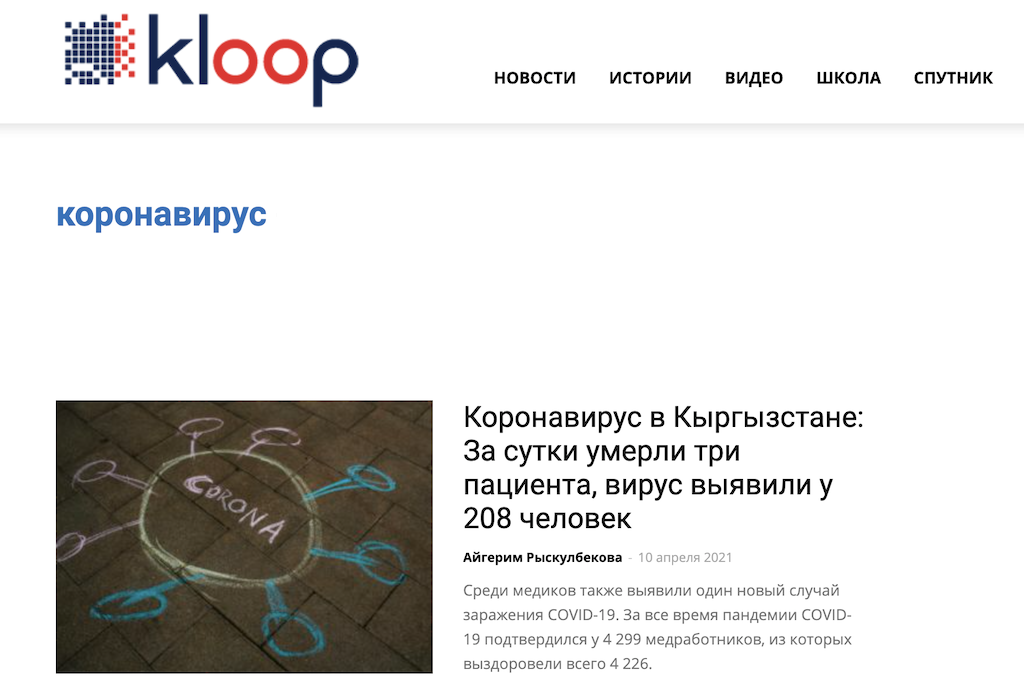 “Usage of grant funds became an additional resource to hire editors to work on weekends and at nights, as well as to hire one more driver to ensure the safe trips of journalists to the fields.”

The Editor-in-Chief of Politklinika Dilbar Alimova emphasizes that, despite the overall stability of the newsroom during the crisis, they faced problems with the lack of the necessary equipment for remote work, the workload of journalists increased, and several employees had been sick with COVID-19. Also, there were problems with renting premises, the volume of advertising and paid materials decreased.

Thanks to the support within Media-K’s Emergency assistance program, Politklinika managed to keep their staff even hiring four additional people to the team. 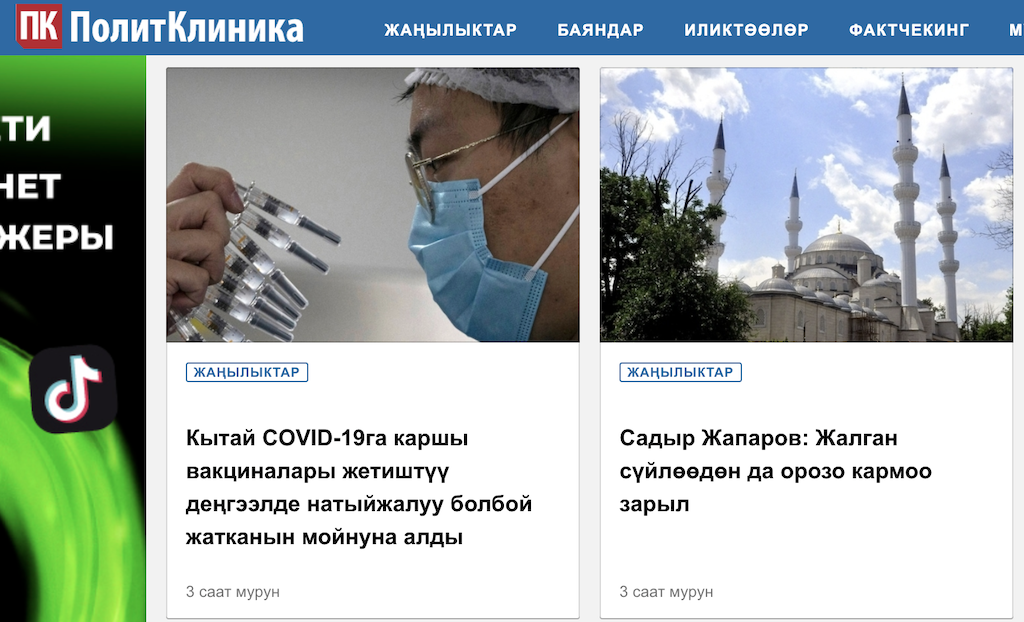 “Thanks to the Internews Emergency Fund, the newsroom was able to restore the payment of full-fledged salaries to employees and opened departments of fact-checkers, investigators and data journalists. Also, participation in the work of the MediaBlokPost fact-checking group helped to improve professional skills.

With the support of Internews in the Kyrgyz Republic, the MediaBlokPost project, and six fact-checkers from various outlets, including Factcheсk.kg, Politklinika, T-Media, Economist.kg, checked the information related to the Covid-19 theme daily.

They posted more than 100 publications in Russian and Kyrgyz in five months. About 20 percent of content falls under the fakenews category. Most of the publications were aimed at fighting disinformation when data is misinterpreted: by mistake or deliberately. 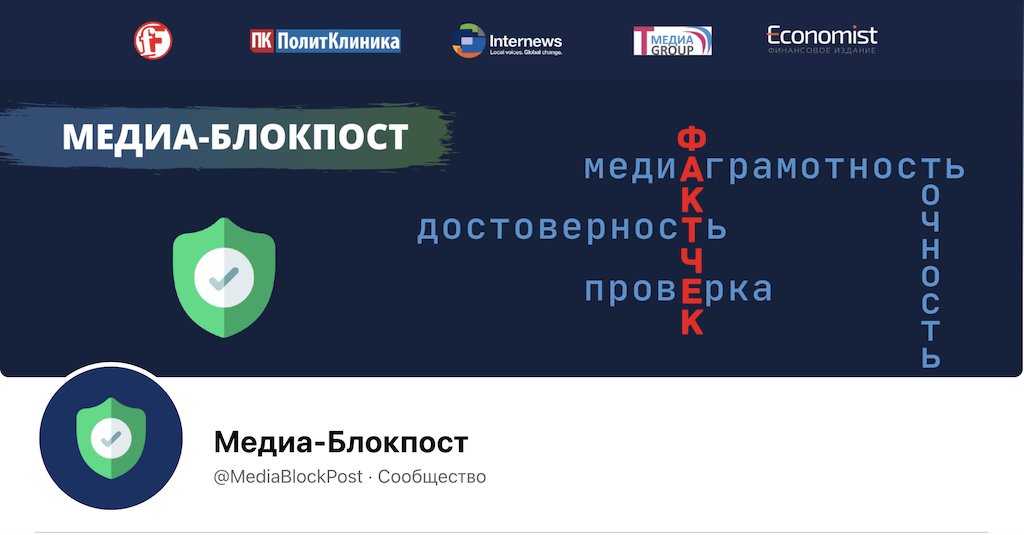 “The role of fact-checkers during this period was unique and multifunctional. They had to clear the information field from an avalanche of fakes, helping the state and other organizations in the fight against the pandemic.

Thanks to the activity of MediaBlokPost, “gray” zones in the healthcare system have emerged. The project helped to identify unlicensed medical activity on the territory of Kyrgyzstan (ozone therapy), dispel myths about drugs with unproven efficacy, and stop massive discussions on social networks that catalyzed panic (for example, about the bodies of children in a cemetery in Osh).”

According to her, the project participants constantly monitored the situation and followed the discussions on social networks. Information was provided from various sources, there was cooperation with the Ministry of Health of the Kyrgyz Republic, business and the expert community, there was an exchange of data with international organizations.

Internews and partners are grateful to the UNDP and the Ministry of Health of the Kyrgyz Republic for providing the data.

Many people in Kyrgyzstan during the crisis of the healthcare system in July 2020 and the sharp surge in coronavirus pneumonia saw how media actually performed the function of social services: thousands of citizens who did not know where to go for help called the newsrooms.

Independent online media told readers what was really going on: they gave the population up-to-date information which was necessary at that time, contacts of doctors and psychologists, information on hospital beds, medicines, diagnostics, and laboratories.

At the same time, journalists faced unprecedented constraints of access to information. The journalists have been getting information putting their own safety at risk.

The media revealed the truth about the situation, exposed failures of the government, established public relations and gave people hope that they would not be left without support.

The support was made possible by the long-term Media-K project aimed to develop independent media in Kyrgyzstan, which is being implemented by Internews in partnership with FHI360 and funded by the United States Agency for International Development (USAID).

Screenshots from the partner sites.