Unique stories, each of which filled with courage, optimism and faith in their own power to change the present and the future to improve. RP Media Center “Demge dem” prepared a draft “aspiration”, they talk about women, girls, really strong, adventurous and inspiring. Different nationalities, age, social status and from different regions of Kyrgyzstan.

Once again, prove a simple formula for success, that only hard work, especially on yourself, and focus on results bring success. The project authors believe that their character and their recipes for success, achieving goals inspire other women and girls on a more active role in social, economic and political life of the country, and allow them to become stronger and more confident in their abilities and capabilities.

Showing examples of women representatives of different ethnic groups and nations will boost their tribeswoman, will promote diversity in the country, and will allow viewers to submit contributions of different peoples of Kyrgyzstan in development of the country. 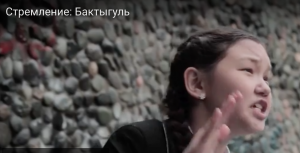 Baktygul Rakimbaeva – purposeful young girl, could serve as a shining example for others to follow, not only to their peers, but also for many adults. She was only fifteen. Like many in this age, it faces a lack of understanding from others, with only one difference; her concern is quite different from the interests of other young people. Hobbies are also far from the preferences of today’s teenagers. Theater, sports, reading Epic Manas. Passion for the latest, the relatives took a negatively and even banned. However, she was able to break this stereotype, taking first place in the school competition, and later took part in the national contest of reciters of the epic.

From the first years of Kyrgyzstan’s independence, it was not an easy task to rescue the country’s economy and family budget, all that rested on the shoulders of many women, entrepreneurship and the pursuit of goals have borne fruit. Anisa Yakubov – philanthropist, entrepreneur, loving mother of 3 children and a wife. A physicist by training, she wanted to be a researcher, but there was no material basis. Twenty years ago, she and her husband, opened a business from scratch. After years of hard work, she could realize her dream to study science. She opened the Research Centre where he conducted research in the field of biology, and cell reproductive therapy, investing in equipment and constant education center doctors.

Ganifa Zhunusova – Chairman of the Women’s Committee, a public activist. Ganifa held in all senses of the woman, an accountant at one of their successful enterprises. Prior to the tragic events of June 2010, she did not think that would hold the light in the house and the water in the village. It all started with the delivery of humanitarian assistance to the affected areas, and then went to new concerns. People who have received new sites and housing remained without electricity and water, and had to write projects, to find donors to provide the necessary people. However, writing projects wasn t the most difficult; more difficult to get people to believe in the fact that women can initiate and carry through what is beyond the power of the majority. Often solving one problem depended on another problem. And every time Ganifa Zhunusova looking for new outlets. Now she is working on providing with work the people from new villages.

Zuhra Shidakova is the head of the Association of karachay”Ata-Jurt”. Also engaged in business and charity. Economist with higher education, Zuhra Shidakova, has made a career in the professional field almost immediately. In just a few years from the shop assistant to the head of the trade association. However, all of this has been lost with the collapse of the Union. The union broke up, but the heroine does not get lost and become an individual entrepreneur. But, today it is not the main thing in his life she thinks. Most of her time she devotes to the development of philanthropy and cultural center karachay. It already 7 years she is been working for the Assembly of Peoples of Kyrgyzstan. Early orphaned Zuhra Hadzhimahmudovna today helps hundreds of orphans,as for her own children and refers to the assembly group dance. She does not spare neither strength nor the time to prepare for concerts. In addition, while she had enough time to write books, probably read that someday someone, as she wants to help people. After all, it is bequeathed to her mother – one who raised nine children.

Karamat Zakirova – Distinguished lecturer, worked in the school forty-three years, the way it was from the teacher to the headmaster … It educates children in patriotism and love of country. With its assistance, the school is equipped with the necessary equipment. Karamat Zakirova twice deputy ayil Kenesh, it has developed several projects to reduce unemployment among women, has helped low-income families, set in the village transformer. The villagers have named her “own” Datka. Later, she was awarded this medal named Kurmanjan Datka.

Muyassorhon Ubaydullaeva, having retired managed to defeat the stereotype that with age comes a woman and fading vitality. She conservationist, calls for the preservation of “Arstanbap” forests, helps women, contributes to the development of ecotourism. Muyassorhon Ubaydullaeva former geography teacher is now grows flowers that not only decorate her home, but also bring a decent profit. She sells flowers, telling how to grow them. Now in its disciples former colleagues. In addition, each year it plays host to visitors from all over the world at home. No language barrier, Muyassorhon husband speaks English and German, and helps in the translation. For forty years, she educates youth, calls for the preservation of protected forest, and contributes to the development of tourism, for the prosperity of Kyrgyzstan.

TV project «Aspiration» of the Media Center “Demge-dem” is implemented with the support of Internews in the framework of the program of small grants, with funds provided by the US Agency for International Development (USAID).

Intren of Internews in Kyrgyzstan